In honor of International Women's day and because I was itching to write about a certain haplogroup, I decided that this was the opportune time for me to write!

My own personal maternal haplogroup came as a nice surprise to me when I first tested in 2009. When I got my results I was able to see that my maternal haplogroup was the indigenous C1b4. This group as you can see below is present in both Asia and the Americas. My guess is that somewhere along my maternal ancestress' line I descend from a Taíno/Arawak woman. 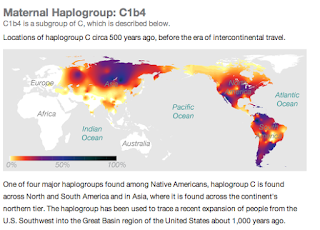 Similarly, another group found on the maternal side of the family that is also connected to Native Americans is called A2. A2 has a higher concentration up in North America near the Bering Strait. However, you can also see that it is evenly common and widespread throughout Central and Southern America. Again, this haplogroup was most likely introduced to my family through a Taíno/Arawak ancestress. 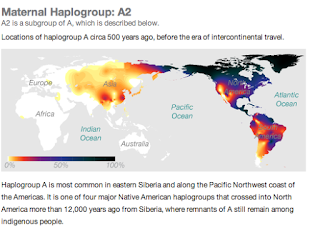 Found on my paternal side of the family is the only African Haplogroup I've discovered so far called L2a1. This haplogroup is found amongst African Americans seeing as how it is commonly found in Sub-Sahara Africa amongst the Bantu-speakers. Since it is so widespread it is difficult to pinpoint exactly where in Africa my ancestress would have originated from. Some speculate that its origin lies somewhere in Central Africa. Due to the Atlantic Slave Trade, many L2a1 carrying women entered areas such as the Caribbean, South America and North America which is why it is so commonly found there. I have not been able to figure out who my original L2a1 African born ancestress was, but hopefully one day I'll be able to know more about this line and haplogroup. 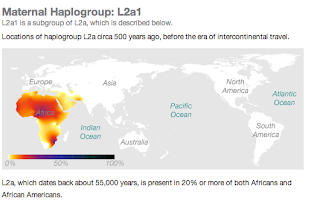 Lastly, my great grandfather is the only one in my family tested so far to carry a European haplogroup yet with an interesting history. His maternal haplogroup is known as U5b1b1b and can be found amongst the Basque and even amongst the Saami population in Northern Scandinavia. 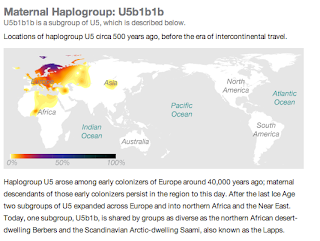 U5b1b1b is part of the branch U5 which "arose among early colonizers of Europe around 40,000 years ago". But what's more interesting about this group is that is seems to have made its way back into Africa via Northern Africa where it can be found amongst people in Morocco and even as far south as Senegal. The big question for me is: Where did my U5b1b1b ancestress come from herself? Did she live in southern Spain before heading off to Puerto Rico? Was she a Moroccan woman who's family found their way to Spain and settled in Al-Andalus? Or was she just a European woman who's husband decided to head to the Caribbean and she agreed to the journey?

So far any of these stories and many others are possible. What's interesting is that my great grandfather does carry, according to Ancestry Composition, North African genes. Pictured below is his Chromosome 4 on "Standard Estimate" and the dark blue on the top is the North African he carries. There is a smaller chunk of it as well on Chromosome 7. Who he receives these genes from is still a mystery to me! Also in Ancestry Finder he receives a match with all 4 grandparents born in Morocco.

Hopefully one day I'll be able to name who these women were and talk about the lives they would have lived!
Posted by Luis Rivera at 11:31 AM 7 comments:

This genealogical year has been off to a good start! The mystery of my Martinican ancestors is almost coming to a close (though there is still much to sort out!) Last week the Vieques church records I ordered to the LDS center arrived and I was pumped to search through them.

I knew that my 3rd great grandmother was, as far as I know, one of 7 children. She being the first born and the next 6 in chronological order being: Tomás, Valentina, Areopajita, Dionisio, Alberto Fermin, and Martina Isabel. I had Dionisio's (born in Fajardo), Alberto's (born in Salinas) and Martina's (born in Santa Isabel) birth/baptismal certificates but I didn't have my 3rd great grandmother, María Paulina or Tomás', Valentina's and Areopajita's. Here is a pedigree I made of the Gustave-Lautin siblings and family.

Luckily in the Vieques church records I was able to find both María Paulina's and Tomás' baptism records. My 3rd great grandmother was born on the 15th January 1867 and baptized on 14th February 1867 in Vieques, Puerto Rico. While her brother Tomás (who's picture I found in the passport records) was born in Vieques as well on 28 December 1869 and baptized on 20th February 1870. What I found very interesting is that they both were surnamed "Charles" in these records. Also Tomás' middle name is "Octavio" and my 3rd great grandmother went by Octavia sometimes, so the name might be passed down from another family member! It mentions that the father's name was Gustavo Juan Charles, mixing around the order of the names. The paternal grandparents were listed as Juan Charles and María and the maternal as Eglantina Lotin. This helps me to solidify the Lautin line which I had theorized about in a previous post but had no solid proof. The baptism record helped to show that Juliana was indeed the daughter of a Eglantina Lotin (Eglantine Lautin) and helped to tie up all the loose ends.

We know Jean Charles Gustave (Juan Carlos Gustavo) appears in the the Catalog of Foreign Residents living in Fajardo in 1874. Juan Carlos Gustavo is listed at the age of 55 making him born circa 1819 and was married and "domestico" meaning he probably didn't work at the time. What's interesting is that there is a "Balbino Gustavo" also listed in the book with the age of 29 making that person born circa 1845. My guess is that the "Balbino" was actually my 4th great grandmother who's middle name was Balbina and she herself was born in 1844, it was probably transcribed incorrectly in the book.

Here's a image I made from Google maps showing them hopping around Puerto Rico from Vieques, to Fajardo, to Salinas with years attached showing when they were living in those towns. Martina Isabel was born in Santa Isabel for whatever reason but the family lived for the most part in Salinas before spreading out along the southern coast.

I'm currently stuck on finding more about Jean Charles Gustave. So far I've checked all the towns of Martinique between the years of 1818-1820 for the birth of a Jean Charles Gustave. So far--- no luck! There is a Gustave family living in Ducos (previously known as Trou-Au-Chat) which could be promising though they were there towards the end of the 1800s. Also, there is a Charles Gustave being born in 1821 in Le Carbet to a Marie Olympe, he is the only closest match I have. My guess is that Jean Charles Gustave was of some kind of Mulatto mix born out of slavery (in the 1848 records of the slaves being entered, I found no Gustave-surnamed family that could match). I'm also not 100% sure that he was truly born in 1819. That would make him much older than Julienne, could be possible of course!

My next hope is to get the 1870s Catalog of Foreigners (I'm currently trying to get it through the interlibrary loan). The only thing that worries me is that because by 1867 they were already in Puerto Rico, they might not appear in it. Estela Cifre de Loubriel had to have seen their name in some type of document to jot them down in her book- the only thing is which document!!

Hopefully this mystery will be wrapped up soon enough! I wonder if Jean Charles was fixed with French/some European ancestor or just a descendant of slaves. I'll update once I figure out more!
Posted by Luis Rivera at 9:58 PM No comments: 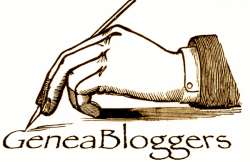